March 06, 2018 at 6:14 pm EST
By Lauren Seabrook, WFTV.com
In the wake of the Parkland school shooting, the Orange County Sheriff has already added an extra resource officer outside every school in the county.
And on Tuesday, Orange County commissioners will vote to put a military-grade assault rifle in the hands of every school resource officer. Orange County deputies say they need this kind of firepower to compete with the type of guns being used in school shootings.
The commissioners will vote to approve $250,000 for the sheriff's office to buy 150 of them, and many will go to school resource officers.
Capt. Carlos Torres from the Orange County Sheriff's Office says the Sheriff's Office wants to arm every deputy with an M4.
“We don't want to be underpowered. We always want to be either having the same or more power than them," said Torres.

ORANGE COUNTY, Fla. — But firearms expert Ryan Stumpf worries that such a high-powered weapon will put other students at risk when used in close quarters, like a hallway or cafeteria.

"It doesn't stop when it hits something. It keeps going. It goes through walls, it goes through doors, it could go through multiple people." said Stumpf.

But Capt. Torres says the same could happen with any gun - and SROs need to be ready for any situation.
"If we're actually just putting a weapon that's just going to be ideal for a school environment, and it just so happens that we have an incident that's not in a school environment, we've kind of limited ourselves now," said Torres.
Torres also says the Sheriff's Office is currently evaluating how to have SROs secure the M4s when they're in schools.
Asked if it's possible they could keep the high-powered rifles on their bodies.
"Absolutely. I think now we've seen it. We've seen where we've had these incidents, and now I think it's more acceptable," said Torres.
"Remember, time is of the essence when these things happen," he added.
Currently, some SROs have tactical rifles, but the sheriff's office wants every SRO and deputy to have military-grade M4s as soon as possible. They will be tested on the weapons twice a year.

Here's what each law enforcement agency in Orange County said about what their SRO's carry:

Details on the M4 Carbine 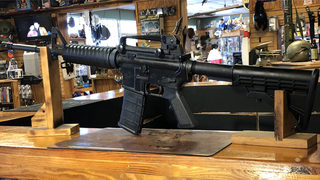 The M4/M4A1 5.56mm Carbine is a lightweight, gas operated, air cooled, magazine fed, selective rate, shoulder fired weapon with a collapsible stock. It is now the standard issue firearm for most units in the U.S. military.

Equipped with a shorter barrel, collapsible stock and detachable carrying handle (with a built-in accessory rail) it provides soldiers operating in close quarters with improved handling and the capability to rapidly and accurately engage targets at extended range, day or night.

A shortened variant of the M16A2 rifle, the M4 carbine provides the individual soldier operating in close quarters the capability to engage targets at extended range with accurate, lethal fire. The M4-series Carbine achieves over 80% commonality with the M16A2 Rifle and replaces all M3 .45 caliber submachine guns, and selected M9 pistols and M16 rifles.