By Irene Sans, WFTV.com
May 16, 2019 at 11:05 am EDT
By Irene Sans, WFTV.com
May 16, 2019 at 11:05 am EDT
NASA and the National Oceanic and Atmospheric Administration released their end of the year reports today and data shows 2018 ranks the fourth-warmest year on record globally. The No. 5 spots are taken by the years 2016, 2015, 2017, 2018, and 2014. In fact, the 20 warmest years have all occurred within the last 22 years.
But it is not only NASA and NOAA who researched and found the warming trend, other agencies, such as the U.K. Met Office and the World Meteorological Organization, also came to the same ranking and conclusions.

The average global temperature was 1.42 degrees Fahrenheit above the 20th century average, making last year the 42nd consecutive year with an above-average temperature.
Record warm temperatures were experienced in Europe, the Mediterranean, the Middle East, New Zealand, and parts of the Atlantic and Western Pacific. 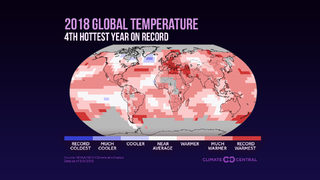 This warmer trend continues to show in both over land and ocean. Climate Central, an independent organization of leading scientists and journalists that focuses on research and reporting factual information to the public, stated in their weekly climate release that the oceans had their warmest year on record, a trend that intensifies sea level rise, coral bleaching and tropical systems, like hurricanes. The sea surface temperature was 1.19 degrees Fahrenheit above average. Land surface temperature was 2.02 degrees F.

2018 across the U.S. -- 22 consecutive years of warmer than average temperatures
According to data from the National Centers for Environmental Information (NCEI), 2018 was the 14th warmest year on record for the U.S. the mean temperature was 1.5 degrees F above the 20th century average. Record warm minimum temperatures were also reached across much of the Eastern and Southwestern U.S. Warm minimum temperature have been increasing across much of the U.S. which may cause problems to humans as we need the temperatures to cool at night for our bodies to recoup from the day’s activities and heating.
It is not all about the temperatures, precipitation (and the lack of many times) also made headlines. The eastern half of the U.S. experienced above average precipitation, according to the NCEI. The country had its third-wettest year on record (124 years of data) with 4.69 inches above the 20th century average.
Much of the western half of the U.S. experienced over 15 weeks of drought. The drought persists in the Southwest and Northern Plains.

Read more: Carbon dioxide reaches highest level: What is it? What to do?

What contributed to the warmth?

Data by the mentioned agencies and reported on The Climate Science Special Report indicated that the warming is largely due to anthropogenic impact, meaning us humans. There are also factors that vary to which degree temperatures warm or cool. El Niño Southern Oscillation is a weather pattern that causes temperatures to rise. Scientists can spot how much El Niño contributes to specific years. During 2015 and 2016 there was a strong El Niño and even without El Niño reports by NOAA and other agencies show that the Earth would have still had record warm temperatures. This signals the direct correlation between our activities and the impact we have in our planet.

2018: The cost of weather and climate disasters.

As the world continues to warm, mainly due to human activities, we also saw the increase of weather and catastrophes around the globe. Just in the U.S. there were 14 billion-dollar disasters. In total, natural disasters cost $91 billion in 2018, this includes $25 billion in direct losses by Michael, $24 billion by Florence and $24 billion by the western wildfires. 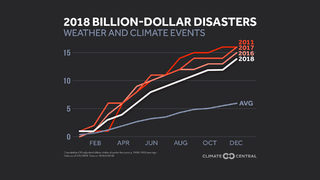 Read more: Florida's winters are warming faster than any other season

If you're getting value from the US and Global climate reports from @NOAANCEIclimate it's worth mentioning that both of the lead analysts/authors are women. And the BAMS State of the Climate? A third. My colleagues are awesome.

The changing oceans Oceans support all of Earth's living organisms