February 08, 2018 at 10:48 am EST
By WFTV Web Staff
SpaceX's big new rocket has blasted off on its first test flight, carrying a red sports car on an endless road trip past Mars.
The Falcon Heavy rocket rose Tuesday from the same Florida launch pad used by NASA nearly 50 years ago to send men to the moon. With liftoff, the Heavy became the most powerful rocket in use today.

The three boosters and 27 engines roared to life at Kennedy Space Center, where thousands gathered to watch the launch which had been delayed by high wind.
Two of the boosters are recycled and programmed to return for another touchdown on land. The third is brand new and has its sights on an ocean platform.
Watch the launch here:

Jetty Park reached capacity by 10:30 a.m. Tuesday.
SpaceX chief Elon Musk says the center booster of the Falcon Heavy slammed into the Atlantic at 300 mph, missing the floating landing platform.
Musk says it hit the water with such force that shrapnel flew onto the droneship's deck and took out two engines.

View from SpaceX Launch Control. Apparently, there is a car in orbit around Earth. pic.twitter.com/QljN2VnL1O

Despite the loss, Musk reveled in Tuesday's successful launch of the powerful Falcon Heavy and the recovery of the two side boosters. He said watching the simultaneous side-by-side touchdowns of those two boosters at Cape Canaveral Air Force Station was probably the most exciting thing he's ever seen.
If the cameras on the ocean platform were not wiped out, Musk says he'll try to salvage the video and add the images to his greatest bloopers' reel of exploding rockets.

Congratulations @ElonMusk and @SpaceX on the successful #FalconHeavy launch. This achievement, along with @NASA’s commercial and international partners, continues to show American ingenuity at its best! pic.twitter.com/eZfLSpyJPK

Photos: SpaceX Falcon Heavy rocket launch from Kennedy Space Center
The mega mission launch window was set to open at 1:30 p.m., but that was pushed to 3:45 p.m. because of upper level winds, SpaceX said. The massive rocket launched from the very same pad (39A) used for the Apollo missions. SpaceX’s pad was damaged on September 2016 when a rocket exploded.

>> Download the WFTV app <<
The Falcon Heavy rocket was a test launch, with a cost of about $90 million. The heavy lift vehicle can place about 68.3 metric tons in low Earth orbit.
At about 118 metric tons, the most a rocket has carried into orbit was the Saturn V, which was used in the Apollo program in the 1960s and 1970s, and to launch the Skylab space station.
The most recent version of a single Falcon 9 rocket can lift 13.2 tons.

SpaceX founder Elon Musk had played down expectations for the launch publicly, saying this is a brand new vehicle with 27 engines having to work in sync.
Tens of thousands of people went to Florida's Space Coast Tuesday to witness history.
"We expect upwards of 100,000 people will come to the community just to see the launch, and that's on top of the people that are already here, including our seasonal guests, so it's going to be a huge crowd," said Eric Garvey with Space Coast Office of Tourism.
Here are the main points to know about the historic Falcon Heavy liftoff:
>> Todo lo que tiene que saber sobre el histórico lanzamiento de SpaceX <<

Get the latest weather forecast for Central Florida 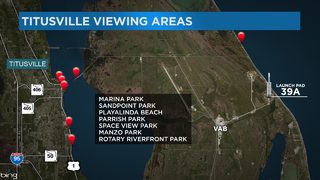 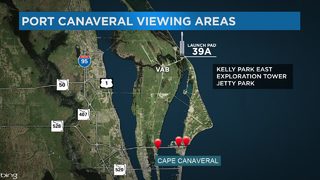 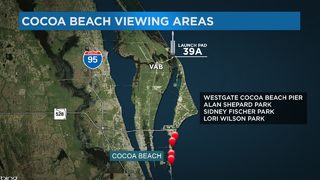