Wayne Anthony Walker, 58, is charged with criminal homicide, murder in the first, second and third degrees, kidnapping and conspiracy in the death of Denise Marie Pierson.

Pierson, 18, of Linwood, vanished the night of April 14, 1981, while visiting a friend in Marcus Hook, Delaware County authorities said. Marcus Hook is a borough located about a mile from the Pennsylvania-Delaware state line.

Her skeletal remains were found in July 1984 along railroad tracks that run behind Marcus Hook Elementary School.

Walker and another man, Peter Thomas Horne, were long suspected of being involved in Pierson’s slaying. Horne, a serial rapist who lived just a few blocks from where Pierson’s body was found, was in his late 60s when he died in prison while serving a stalking sentence in 2013.

Two more suspects are under investigation for their alleged involvement in the case, according to the Delaware County District Attorney’s Office.

“For 40 long years, the family of Denise Pierson has sought answers in connection with the death of their loved one. We hope that today’s announcement brings a measure of healing and closure that they’ve been denied for too long,” District Attorney Jack Stollsteimer said in a statement. “To the families and friends of all victims awaiting justice for crimes committed in our County, we hope this case sends an unequivocal message that you are not forgotten by the detectives and prosecutors in my office.”

Detectives with the Pennsylvania State Police and the prosecutor’s office are investigating the case.

Law enforcement officials often say that cases have the best chance of being solved within the first 48 hours after they are committed. Trooper First Class Andrew Martin said in a news release, however, that in Pierson’s case, time was on the side of investigators.

“It is often found that relationships change throughout the years. Witnesses who may have been reluctant to come forward in the past, are now more willing to assist,” Martin said. “People previously confided in by suspects because they were trustworthy may not have the same loyalties 40 years later, and this is exactly what we have found with this investigation.”

Pierson visited a girlfriend the night of April 14, 1981, at the girl’s apartment on 9th Street in Marcus Hook, less than a mile from her own home. Contemporary news reports indicated she left around 5:50 p.m. to meet her boyfriend at 6 p.m. for a date. She never made it.

Her parents last heard from her just after midnight on April 15, when she reportedly called them from Delaware, the Philadelphia Inquirer reported in 1981. According to the newspaper, Pierson’s 17-year-old brother answered the call.

As her mother picked up the phone to talk to her, Pierson blurted out, “Mom!” The phone went dead. 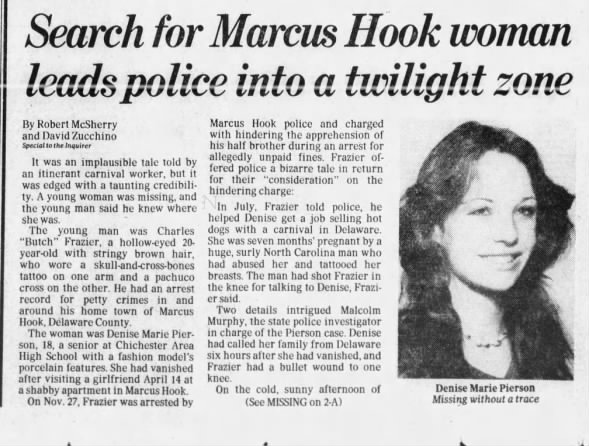 The Piersons never saw her again.

Denise Pierson had seemingly vanished into thin air. No sign of the missing teen was found, despite a plethora of reported sightings, tips and false leads. Pierson’s parents, Jack and Barbara Pierson, went so far as to hire a psychic to find the Chichester Area High School senior.

All efforts were to no avail.

In January 1984, however, Crozer-Chester Hospital’s Crisis Intervention Center received a call from a man who said he had killed Pierson. According to the news release, that call was traced to Horne’s home, which was located in the area of 9th Street and Church Street.

Horne, who was 36 when Pierson vanished, denied making the call, but a search warrant executed at the duplex where he lived resulted in the discovery of two blackjacks. Blackjacks are small leather clubs constructed out of a weighted pouch, typically filled with lead, and a handle.

That February, the owner of the auto garage where Horne had worked in 1981 confirmed that Pierson’s mother was a customer at the business. Pierson’s mother told police her daughter had been with her multiple times when she went to have her car serviced.

Five months later, a group of boys playing along the railroad tracks behind the elementary school followed a rabbit into some brush, the Philadelphia Daily News reported. Instead of the rabbit, they stumbled upon Pierson’s battered and decayed remains.

The spot where Pierson’s remains were found was just 300 yards from Horne’s home. Her autopsy showed she died of blunt force trauma to the head.

Investigators did not have enough evidence to make an arrest, however, and the case once again went cold.

Ten years later, in March 1994, detectives interviewed a man identified only as “Suspect 1″ in the news release. The man told investigators that Pierson, who he described as “naïve and trusting,” had been to his apartment the night she disappeared.

The man identified Walker and another man, called “Suspect 2,” as potential suspects in the homicide, according to Stollsteimer’s office.

That August, cold case investigators received information from a man who once shared a jail cell with Walker.

“Defendant Walker had admitted to his cellmate that he had been at a party at Peter Horne’s residence with the victim and others, including Suspect 1,” the news release states. “According to the cellmate, Walker stated that at one point Horne and the victim left the party to go to Delaware.

“When they returned to the residence, the victim was upset and placed a call to her mother. Suspect 1 grabbed the phone and Horne hit her in the head with a black stick.”

The description was consistent with the blackjacks found at Horne’s former home.

The cellmate said Walker told him he, Horne and Suspect 1 carried Pierson to the train tracks, where they covered her body with brush.

Throughout 1994 and 1995, detectives questioned Walker multiple times, according to authorities. In those interviews, he allegedly confirmed portions of his former cellmate’s story.

Walker told police he was at Horne’s home, where they were playing a game called “spin the stick,” the night Pierson vanished.

“During the game, the victim charged for the door in an attempt to flee the residence,” prosecutors said. “Defendant Walker stated that Horne then hit the victim with a stick and she started to bleed.”

Walker alleged that Suspect 2 gave Horne some clothesline to tie Pierson up and that Horne placed her body in green trash bags, according to the news release. They then used a wheelbarrow from Horne’s patio to take Pierson’s body to the tracks behind the elementary school’s parking lot.

In the parking lot, the men removed the trash bags and Suspect 2 hit Pierson with a railroad spike before leaving, Walker allegedly said.

Walker, who claimed that he had been threatened to keep quiet about the murder, told authorities he had returned to the site to have sex with Pierson’s body after she was dead, the news release states.

Based on information provided by Walker, detectives searched near a concrete storm sewer junction box and found rope, clothing and a piece of jewelry. The rope was similar to rope recovered from the crawl space of Horne’s former home earlier that same year.

“She confirmed that he kept a wheelbarrow at the house, as well as poles with several clotheslines,” according to prosecutors. “She also stated that Horne kept a weapon hidden in the basement of the residence. A search warrant was executed, and a .32-caliber Derringer-style handgun was recovered, as well as a billy club.”

Horne was arrested and charged with firearms violations, authorities said.

Still, authorities did not have enough evidence to tie him or anyone else to Pierson’s murder.

“Sadly, this case has an extremely long and complicated history,” Martin said last week. “As the chronology demonstrates, over the decades, investigators continued to work the case, but were unable to reach the threshold that would permit them to bring charges.”

Two years later, in 1997, Horne was arrested on the stalking charges. According to the Pocono Record in Stroudsburg, Horne was convicted the following January of stalking an ex-girlfriend and stealing a bird feeder from her Delaware Water Gap home.

At his sentencing, Horne expressed remorse and said he “never knew what (he) was doing was this severe.”

“I just acted like a total fool,” he said, according to the Record.

The newspaper reported, however, that along with being questioned as a person of interest in Pierson’s murder, Horne had a history of violent crimes, including two rape convictions and one of sodomy in the 1960s. He also escaped from custody three times, including once from a hospital where he was being treated for injuries a fellow inmate inflicted upon him.

Horne was released from prison in the late 1970s after serving 10 years.

He was back behind bars, serving time in State Correctional Institution-Mercer, when he died in 2013.

“During the interview, she admitted that she had been told to lie by Horne when investigators asked about the blackjacks that had been found at the residence,” prosecutors said.

The widow said she believed her husband had killed Pierson.

As the case moved slowly forward, detectives conducted multiple interviews with friends and family members of all four suspects.

“Investigators learned that as time had passed, the suspects had begun to discuss details of the murder of Pierson with numerous acquaintances,” according to the news release. “Investigators began to compile and corroborate these details with case facts and evidence.” 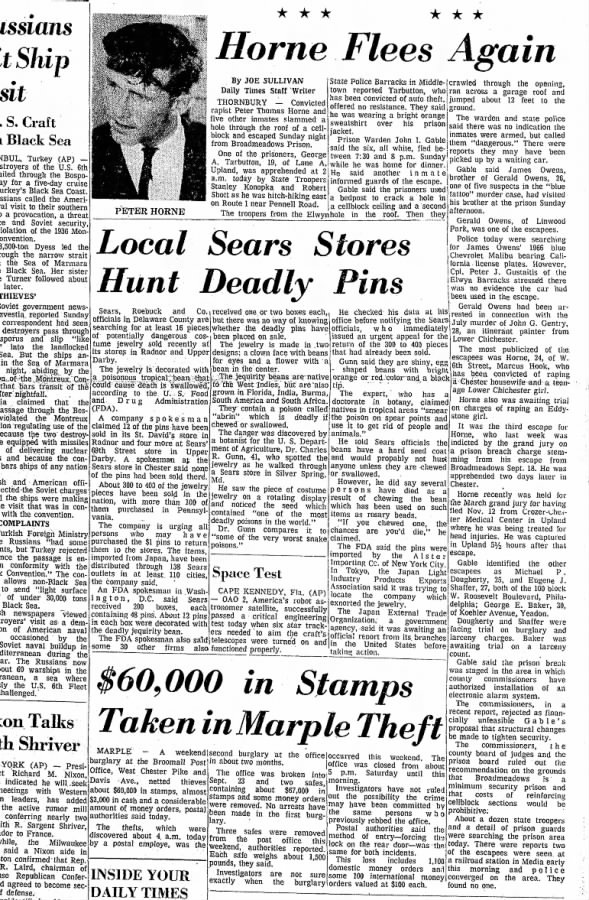 In July 2021, the Pennsylvania State Police began working with a forensic anthropologist, who reviewed the autopsy report, the medical examiner’s notes and photos of Pierson’s remains. Dr. Erin Kimmerle, who works at the Florida Institute of Forensic Anthropology and Applied Sciences at the University of South Florida, determined that the slain woman had been stabbed above her jaw, adjacent to her ear, at the time of the crime.

The puncture wound was consistent with a 6-inch folding knife that had been recovered with Pierson’s body from the area of the train tracks, authorities said. The anthropologist also determined that the blunt force injuries on Pierson’s skull were consistent with the blackjacks recovered from Horne’s former home.

The discovery of the knife wound helped detectives corroborate the statements of witnesses in the case. Walker, who was already jailed on unrelated assault charges, was charged with Pierson’s killing last week.

Stollsteimer thanked the state troopers involved in the case, as well as Assistant District Attorney Geoff Paine, who heads his office’s cold case unit, for providing the necessary answers to Pierson’s family.

“These cases can feel hopeless, but as today’s charges make clear, with the new tools and technology that emerge every day in the field of forensics, we must never give up,” the prosecutor said Friday.

The Pierson case remains active, and there is a $5,000 reward being offered for information leading to the arrest of additional suspects.

Anyone with information should contact Trooper First Class Andrew Martin of the Pennsylvania State Police’s Criminal Investigation Assessment Unit at 215-452-5216.