‘All I could do was lay there,' Woman says after she was dragged from bike trail, sexually battered

Video: ?All I could do was lay there,? Woman says after she was dragged from bike trail, sexually battered A woman says she was walking along a bike trail near a Clermont park when she was grabbed and taken into nearby woods by two men who sexually battered her, police said.

CLERMONT, Fla. — A woman says she was walking along a bike trail near a Clermont park when she was grabbed and taken into nearby woods by two men who sexually battered her, police said.

Clermont police said the woman stopped someone around 5 p.m. near Lake Hiawatha Preserve and told them what had happened.

Editor's note: Some people could be triggered by the details of this story

According to police, the woman said the sexual battery occurred between 3 and 5 p.m.

The woman said she believes the men were in their 20s or 30s. She said one man was skinny with dark greasy hair and the other man was of average height and had long curly hair.

The woman told police she only saw the men from the back, as they were riding away on their bikes.

Officers said they are working with the woman to draw up sketches of the suspects.

Officers said security cameras near where the woman said she was attacked were not working at the time.

After the woman got away, she was able to reach another person for help, and that person called 911.

"A girl just ran up to the bathrooms and her clothes are ripped off. Two boys, she said, attacked her," said the caller.

In the 911 call, the caller said the woman's pants and underwear were ripped open.

According to a report, the men had been riding bicycles and calling out to the woman before they approached her.

Police said the woman told the men to leave her alone, but they grabbed her arm and pushed her to the ground.

The woman told police that, after the attack, she lay on the ground for several minutes. She told police, "All I could do was lay there."

The woman said she was carrying a pocketknife during her walk.

She told officers that, during the attack, she attempted to scare the men with it, but the men used the pocketknife to rip her clothes and then tossed it into an unknown location.

Investigators said they believe this was an isolated incident and that the community is not in any danger. They said the investigation is active and ongoing as they continue to look into all leads.

Police described the alleged attack as "extremely out of the ordinary" for the area.

Anyone with information is urged to call the Clermont Police Department at 352-394-5588, option 3. 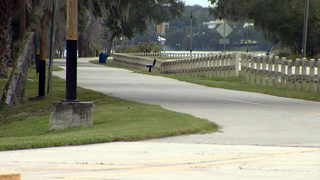