William ‘Billy’ Mansfield: What you need to know (NCD)

SPRING HILL, Fla. — On a March day in 1981, the U.S. news cycle was dominated by details of the would-be assassin’s bullet that nearly killed President Ronald Reagan.

A small blurb deep in the pages of The New York Times told, however, of an ongoing search for the remains of several women buried in the junkyard surrounding a family’s mobile home in Weeki Wachee Acres area of Spring Hill, Florida. By that point in the search, Hernando County deputies had uncovered the skeletons of two women and the partial skeleton of a third.

Authorities would ultimately arrest William “Billy” Mansfield Jr., then a 25-year-old electrician, for the murders of five women, including a 15-year-old girl. Mansfield is serving concurrent life sentences handed down in Florida and California, where he killed Rene Abbey Saling, 29, of Watsonville, on Dec. 6, 1980.

His other known victims were identified as Sandra Jean Graham, 21, and Elaine Louise Ziegler, 15, of Warren, Ohio. Graham, a divorcee, vanished from a Tampa bar April 26, 1980, and Ziegler disappeared while vacationing with her family in Florida five years earlier.

The two other women whose bones were unearthed on the family’s property remain unidentified.

The sordid tale of Mansfield and his family – including a child molester father and a brother who authorities said aided him following Saling’s killing – took yet another twist Tuesday as Hernando County investigators descended on that Florida land, where his father, William Mansfield Sr., and brother, Gary Mansfield, still live.

William Mansfield, who went to prison in 1980 for sexually abusing young girls, was released in 2005 after serving about a third of his prison sentence. Mansfield, now 80, was released early for good behavior.

The Tampa Bay Times reported in 2005 that William Mansfield’s crimes included sex acts with dozens of children, including one girl who was just 9 months old when the abuse began.

Gary Mansfield beat his charge of accessory after the fact in Saling’s murder by cooperating with authorities in their case against his brother.

On Tuesday, detectives went to Gary Mansfield’s home at 3422 Roundup Lane, located behind his parents' home, armed with a search warrant in a drug case, according to Hernando County authorities. They seized illegal drugs and the equipment for a meth lab.

The drugs weren’t all they found, however.

“Additionally, detectives located items on a nearby property that were deemed to be suspicious,” according to a news release from the Hernando County Sheriff’s Office. “These items are separate and apart from the narcotics investigation and have been sent for laboratory testing.”

It is unclear what the suspicious items are, and authorities are keeping silent while testing is underway. WFLA, which cited unnamed sources, reported that possible human remains had been found.

A news crew from the station shot footage of forensics vehicles and excavation equipment that was apparently being used to dig up areas of the family’s property. Fox 13 in Tampa also reported that a University of South Florida forensics team was at the scene, helping investigators gather the evidence.

UPI reported in April 1981 that an informant’s details had detectives certain they would find at least two more bodies on the property, though that belief never bore fruit.

Billy Mansfield’s son, also named Billy, told WFLA on Wednesday that he also believes additional bodies will be found on the family’s property.

Investigators this week are searching the property on which infamous serial killer Billy Mansfield Jr. buried his victims in the 1970s and early 1980s. They also arrested his brother on a slew of drug charges. Via @JackHEvans https://t.co/OSY5rg6l5q

Gary Mansfield, 63, was booked Tuesday on multiple drug charges, including possession of methamphetamine with the intent to sell, possession of a structure or vehicle to manufacture drugs and selling drugs within 1,000 feet of a place of worship.

The Mansfield family’s property is less than 500 feet from a church called Iglesia De Dios Corona, or the Church of God’s Crown.

A family history of violence

Billy Mansfield had already served time in Michigan for sex crimes when he returned to the family home in March 1980, according to contemporary news accounts. A 2018 obituary for the family matriarch, Virginia Mansfield, indicates that she and her husband had at least five sons and a daughter.

According to The New York Times, four of the six siblings lived at home with their parents in 1981 as law enforcement officers armed with shovels and bulldozers tore through the ground looking for remains. At the time of the grim excavations, William Mansfield had been sentenced to prison for his sex crimes against children.

Serial Dispatches, a true crime website that details serial killings, reported that Ziegler was Billy Mansfield’s first known victim. The Ohio teen and her family were camping at a KAO campground in Brooksville, Florida, on Dec. 31, 1975, when she went to take a shower and vanished.

Her body was found years later buried on the Mansfield family property. 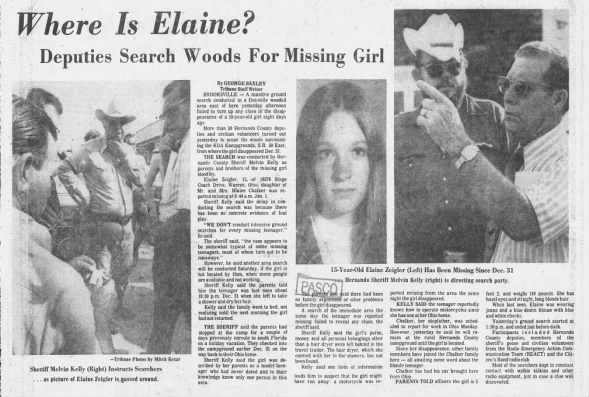 By 1979, Billy Mansfield found himself charged with two counts of rape in Kent County, Michigan, according to the St. Petersburg Times. He was accused of sexually assaulting two girls, ages 15 and 16, at knifepoint on New Year’s Eve 1977 – the second anniversary of Ziegler’s disappearance – in Grand Rapids.

In exchange for testifying against his cellmate in a murder case, however, his potential life sentence was reduced to a year behind bars. He was released in February 1980.

Two months after he returned home to Florida, on April 26, he was spotted with Graham at a bar in Tampa. She was never seen alive again, the newspaper reported.

Her body would eventually be the fourth dug up from around the Mansfield family’s mobile home, UPI reported. She was reportedly strangled with an electrical wire. 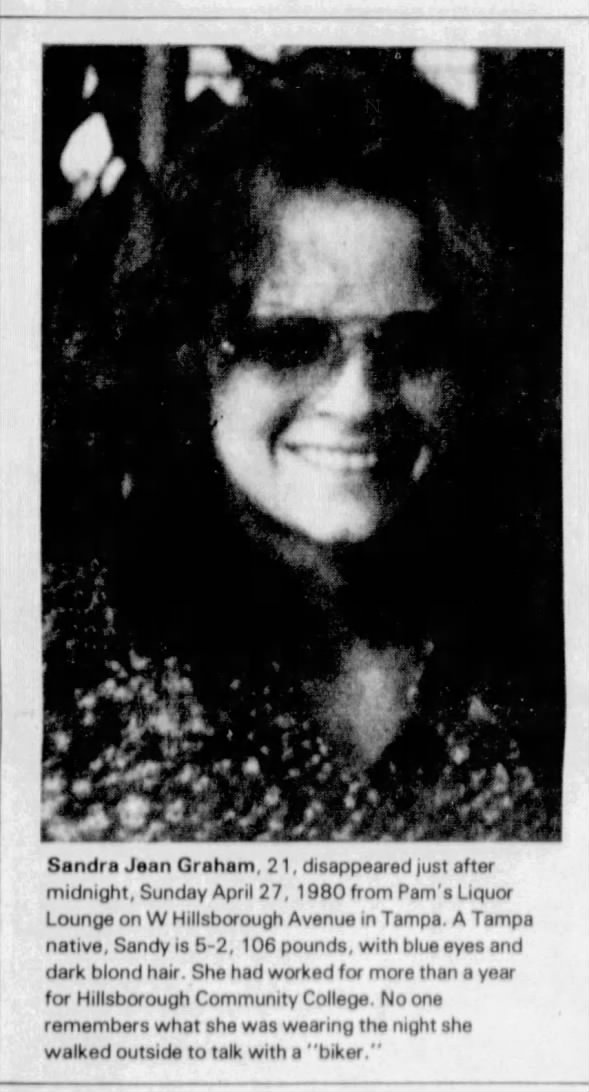 In June 1980, Billy Mansfield was accused of false imprisonment and battery against a woman in Hernando County. With a warrant hanging over his head, he and Gary Mansfield fled to California, where authorities were able to place the brothers living at a KOA campground near Santa Cruz that September.

Billy Mansfield was seen at a bar in nearby Watsonville with Saling the night of Dec. 6. The body of the married mother of three was found in a water-filled drainage ditch the next day, the St. Petersburg Times reported.

She had been strangled elsewhere and her body dumped in the ditch.

By the time California investigators linked the dead woman to Mansfield, he and his brother had fled. They were picked up in Nevada three days after Saling’s body was found.

It was while he was awaiting trial in Saling’s murder that a confidential informant told Florida authorities Ziegler’s body could be found buried on the Mansfield property.

The first bones discovered behind the family’s mobile home on March 17, 1981, turned out to be the remains of one of the women still unidentified. She was found wrapped in a blanket in the fetal position. 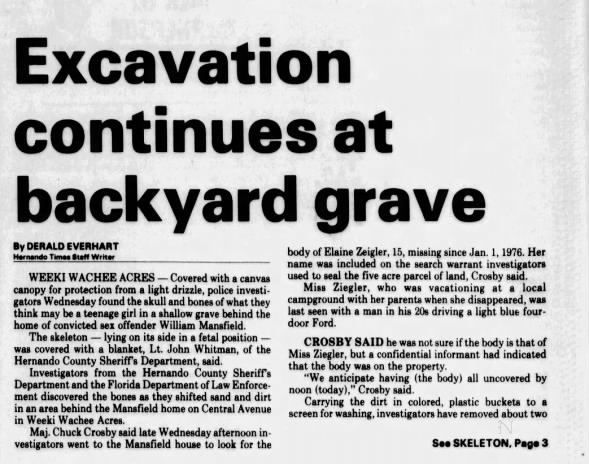 The National Missing and Unidentified Persons System, or NamUs, said an aqua pendant with a unique heart design on the front was also found with the body.

The woman, who was estimated to be between 24 and 28 years old, was killed sometime in 1979 by blows to the head. Her neck and right wrist were bound with black wire, the Tampa Bay Times reported at the time.

Ziegler’s body was found March 25, 1981, underneath plastic water pipes and electrical wiring to the Mansfields' well pump, which was apparently installed since the girl was buried.

“Investigators had the pipes and wiring removed, and that action brought Mrs. Mansfield and one of her sons out of the mobile home to complain to reporters,” the newspaper story said.

The rest of Zieger’s remains were soon unearthed. Forensic anthropologists determined she died of multiple penetrating wounds to the head.

The second unidentified victim was discovered April 3, 1981, about 75 feet from the mobile home. The remains were believed to be from a girl between 16 and 18 years old, but her cause of death could not be determined.

According to NamUs, that victim was found buried with denim pants, a cream-colored bra and a red polyester blouse with an elastic band around the waist.

Graham’s body was found less than 15 feet from the teen’s remains on April 7.

Following his conviction in California, Billy Mansfield was extradited to Florida to stand trial in the other four murders. He pleaded guilty in exchange for four life sentences that would run concurrently with the one in California.

Mansfield has been denied parole four times since his first hearing in 1996. His last hearing was held in 2012.

He is next eligible for a parole hearing in 2022.

Neighbors of the Mansfields were rattled when deputies showed up on Tuesday to search the property. Pat Gallagher, who has lived nearby for 15 years, told Fox 13 that the stories of the past were unsettling at first.

“And then it seemed like everything was OK until yesterday,” Gallagher told the news station.

Gallagher and other witnesses were left wondering if the items found were related to the bodies many people still believe are there.

“Maybe they’re finding it now,” he said. "They never could come across it.

“I guess we’ll all find out together.”

‘A nightmare’: Janitor, 72, trapped in Orange County courthouse for 3 days prepared to sue

‘I’m afraid to be in a classroom’: Florida teachers discuss rise in student violence