ORLANDO, Fla. — Flooding is one of the most dangerous and destructive weather events. Here are 9 facts to know before the storm.

1. Know your risk:  The Federal Emergency Management Agency has an address look-up where you can see if you are in a flood zone and what your risk might be based on your address.

2. Very common: Of all the natural disasters in the United States, flooding is the most common and most expensive.  Despite the frequency, most homeowners' insurance does not cover flooding.

3. Flood insurance:  It is too late to purchase flood insurance for Hurricane Dorian, however, there are things that are covered. 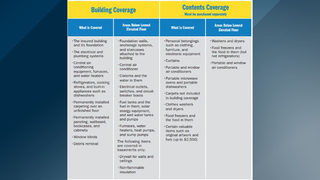 4. River floods: If you live near a river, you can check the current levels through the National Weather Service by clicking on this link.
5. Flash flooding:  The National Weather Service defines  flash flooding as the rapid and extreme flow of high water into a normally dry area, or a rapid water level rise in a stream or creek above a predetermined flood level, beginning within six hours of the causative event like intense rainfall.
6. Tropical systems and coastal flooding:  Tropical cyclones can bring large amounts of precipitation onshore. The majority of the heaviest rain occurs to the right of the center of the storm; however, it should be noted that rain bands on both sides of the system can produce heavy rain.

Latest @NHC_Atlantic forecasts for #Dorian include a storm surge threat in coastal areas.

As you and your family prepare for the storm, make sure to review your evacuation plan. Many localities have services for sheltering & transportation that can help you get to safety. pic.twitter.com/z6HWgbC2se

The WFTV Mobile Weather app will tell you when you are in an area at risk for flooding or flash flooding. Download it for free in the app store or by going to wftvapps.com. Turn on the alerts under 'settings.' Go to the weather alerts you want to receive and choose "flooding.'"

7. Dam breaks/levee failure:  There are more than 80,000 dams in the United States.  FEMA reports that approximately one-third pose a high or significant hazard to life and property if they fail.   Dam failure or levee breaches can occur with little warning.

Overtopping: The water level exceeds the top of the dam.

Excessive seepage: The water seeps through the ground.

8. Storm surge:  Storm surge is a particular problem directly along the coast. Entire coastlines can be altered by the sheer magnitude of the water battering the shores. Storm surge can also travel several miles inland causing additional flooding and destruction. The addition of intense rainfall along the coast can add to the flooding potential.
Hurricane Dorian: What is a king tide and how will it affect Dorian? 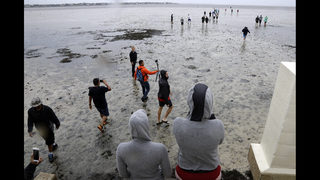 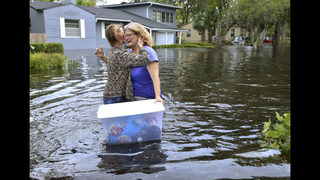 9. Cost of flooding:  The cost of flooding in the U.S. has topped $123 billion from 1980 to 2018, with 29 documented events.  This does not include the number or cost of severe storms and hurricanes.