Eye on the Tropics

Eta moves away from Florida; leaves cooler, drier weather in its wake After its fourth and final landfall, Eta is moving farter northeast off of the Georgia coast.

ORLANDO, Fla. — Eta made landfall early Thursday near Cedar Key, on Florida’s west coast. But is has since moved away from Florida. It is the 28th-named storm of the Atlantic hurricane season. Read live updates below:

>>> CLICK HERE TO WATCH EYEWITNESS NEWS FOR THE LATEST ON ETA <<<

We’re close to having our 30th named system for the season.

Iota is trying to form in the Caribbean. Channel 9 Chief Meteorologist Tom Terry said it should stay south but bring another round of devastating flood waters to Central America.

Chief meteorologist Tom Terry said we are close to having our 30th named system for the season, this time in the Caribbean.

He said Iota should stay south and could bring another round of devastating flooding to Central America.

After its fourth and final landfall, Eta is moving farter northeast off of the Georgia coast.

The storm is bringing flooding rain to the Carolinas with the help of a cold front that is stalled near the middle east coast, chief meteorologist Tom Terry said.

“We are not done yet in the tropics, as we’ll likely have Iota soon,” Terry said. “This could bring more catastrophic flooding to Central America near Nicaragua and Honduras -- the same areas that were flooded by Eta a week ago.”

He said there are no major global models that bring that system toward Florida yet.

“But we’re watching it,” Terry said.

#Eta brought a BUNCH of rain with it, not only to central America a week ago, but to south Florida and our west coast - and NOW along the Carolina coast! Good riddance. pic.twitter.com/H2GEZjAi13

The last bit of Tropical Storm Eta is finally moving away from Florida.

Some areas will continue to see scattered downpours and showers Thursday afternoon, including Osceola and Brevard counties.

Tom Terry is tracking some big changes to the forecast ahead of the weekend. Hint: Cooler, drier weather is on the horizon.

The last bit of Eta is finally moving out... Now, @TTerryWFTV is tracking some big changes ahead of the weekend! Channel 9 Eyewitness News is LIVE starting at 4 p.m. @VEcholsWFTV @GWarmothWFTV pic.twitter.com/NSy0lovhhD

A Marion County man said a tree fell onto his roof landing right where his 6-year-old son was sleeping around 2:30 a.m. Thursday.

Read more about what the family said happened here.

Channel 9 meteorologist Kassandra Crimi said Eta is continuing to pull away from Florida, which means all tropical storm warnings have been dropped in Central Florida.

See what impacts the system will continue to bring to our area’s forecast on Channel 9 Eyewitness News at Noon. Click here to tune in LIVE.

Good Morning!
Eta will continue to pull away today
What does this mean?
All Tropical Storm Warnings have been dropped for our area.
Through the day we'll have cloudy skies, some lingering scattered showers and breezy conditions (nothing crazy,15-20mph) that will improve tonight. pic.twitter.com/V6Hdm2DhPm

Overnight, workers had to help pull cars through flooded streets in Madeira Beach.

Video is continuing to come in from across the state of the impacts from Tropical Storm Eta.

Watch below as first responders help clean up damage from the storm in St. Pete Beach:

Health officials said the COVID-19 testing site at the Disney Maingate complex will be closed until 1 p.m.

To find another testing location in Osceola County, click here.

UPDATE: The @FLSERT #COVID19 test site at the Disney Maingate Complex will be closed today until 1 p.m.

Rain bands move along I-4

Rain bands from Tropical Storm Eta are moving along Interstate 4.

Most areas in Central Florida will experience some isolated rain bands through the morning, but the weather will improve as the day progresses.

Eta will continue to move across Florida through the day.

SunRail said it has temporarily suspended service Thursday due to inclement weather.

SunRail said it will monitor the weather and keep the community up to date as the storm passes through the area.

Service is temporarily suspended due to inclement weather. For service updates please follow us on Facebook/Twitter @RideSunRail, or the SunRail app. For more information visit https://t.co/cZ3dtkZBNS. pic.twitter.com/dRC7s1JcgZ

Eta weakens as it continues to move across Florida

Tropical Storm Eta is continuing to move across northeastern Florida Thursday morning and will move over the western Atlantic by the afternoon.

The storm’s maximum sustained winds have decreased to 45 mph.

Isolated rain moves over Central Florida. The showers will become more scarce through the morning hours. We do not expect severe weather.

By the afternoon, the skies will be gradually clearing and some sunshine will brighten the day. Highs will be in the mid to upper 80s.

The winds will be from the southwest, providing plenty of warmth, breezy, and gusting up to 20 mph.

The same cold front that is pushing Eta eastward will be moving over Central Florida on Friday. We do not expect rains associated with this front, but it will bring us a nice Friday and weekend.

The weekend promises to be mostly stable. Plenty of sunshine and highs in the mid-80s. The winds will be from the northeast.

A stronger cold front is scheduled for early next week.

Refreshing air is about to move in! A fall front arrives Tuesday. Highs will be in the 70s with lows in the 50s. Awesome! pic.twitter.com/FTKsdK0nOv

Eta will produce an additional 1 to 3 inches of rain across portions of the Florida Peninsula through today.

Central Florida could experience some isolated rain bands through the early morning, but the weather will improve as the day progresses.

Expect the day to remain toasty with highs between 85 and 87.

We have something fresh to look forward next week: The next cold front promises to bring lower humidity and cooler temps!

Tropical Storm Eta is about to make landfall near Cedar Key Florida, as it is still producing dangerous storm surge, heavy rains and gusty winds for portions of the Florida gulf coast and northern Florida peninsula.

Eta continues to lose its punch. The National Hurricane Center estimates that Eta has maximum sustained winds of 50 mph and it is forecast to continue weakening as it moves over land. It could re-intensify as a non-tropical cyclone on Thursday and Friday before becoming absorbed by a larger non-tropical cyclone on Saturday over the western Atlantic.

Central Florida this is the isolated band I've been telling you about in your live blog...
Here are your ETA's. (no pun intended) pic.twitter.com/qBZyQMOAUM

It has finally made its turn to the northeast, and it is moving at 13mph. An increase in forward speed is forecast once over land and as it continues over the western Atlantic.

A National Ocean Service station near Cedar Key recently reported sustained winds of 40 mph and a gust of 50 mph.

A flash flood watch is in effect for areas well west of Central Florida, but includes Polk and Sumter counties, until 1 p.m. Any additional rain that falls over these counties could create flooding. Some places in these areas have received over 4 inches of rain.

Really pleasant weather is right around the corner. A cold front arrives next week!

Have a good morning! - Brian

Isolated rain bands through the rest of the morning, before sunrise.

After sunrise, expect gradual improvement, with the winds decreasing and the skies clearing.

It’s going to be a hot day, with temperatures in the mid-to-upper 80s.

Crystal river seems to have been spared by #Eta Windy but no rain right now. #wftv pic.twitter.com/t9aWjmC78q

The heaviest rains are becoming more isolated across Central Florida. In Marion County, where the center of the system is expected to move north of, is under light rain. Channel 9′s reporter Alexa Lorenzo reports gusty winds, but not intense at the moment.

Gettin’ some gusts but nothing too intense! pic.twitter.com/eX3A18R2VB

The heaviest rain is focused along Volusia and Flagler counties. Showers have become more intermittent in intensity over the rest of Central Florida.

There could still be some intense bands moving through our area, but they won’t be widespread.

The severe weather threat has diminished across the region, but the risk for some gusty winds will continue through the rest of the morning hours, until mid morning

Getting some rain in @CityofOcalaFL. Wind picking up a bit now too. 🌧 pic.twitter.com/t3MzFWYtJj

Flood warning issued for entire Tampa area, down to Sarasota and up into Sumter County. Parts of Tampa have received up to 9 inches of rain. Rain is spreading inland away from the center of Eta, which is still over the Gulf. pic.twitter.com/G7w3E0FPB9

Eastern side of #Eta getting closer to the west coast of Florida. Landfall still to come, but gusty winds out ahead of it! pic.twitter.com/AKWVD8MsJy

The 1 a.m. intermediate advisory from the National Hurricane Center states that Tropical Storm Eta is about 65 miles to the northwest of Tampa.

The tropical storm holds 60 mph maximum sustained winds and it is still traveling to the north at 10 mph.

The Tropical Storm Warning south of Englewood has been discontinued.

Eta is expected to take a turn to the north-northeast later this morning.

The system is expected to continue weakening as it approaches the west coast of Florida and is expected to be over the Atlantic by Thursday afternoon.

Scroll down for the latest track and threats to Central Florida.

THE COMPLEX TROPICS: What do they mean? Disturbance, depressions, tropical, subtropical storms, hurricanes

RIGHT NOW: I’m in Sumter County monitoring conditions as heavier rain starts to move in to the southern part of the county. The worst is expected around 3 AM and though tornado risk has lessened, it’s still there. pic.twitter.com/DczbDqyStc

Check out reports coming from Tampa.

This is the downtown Tampa riverwalk. It’s about five inches underwater at this part. #Eta @TB_Times pic.twitter.com/2dgDdAggrO

Read updates from Crystal River all the way across the state to Volusia County here.

The heavy rain bands arrived to Central Florida’s Metro areas shortly before midnight on Thursday. The next 4 hours will be the most intense as the strong showers with embedded storms move, mainly west to east.

Some storms could have rotation. This could trigger tornado warnings. Make sure you have at least 3 ways of receiving weather alerts.

Read: Hurricane Eta: These Central Florida schools will be closed due to storm

Rain: between 1 to 3 inches are possible across Central Florida and isolated higher amounts where rain bands become more persistent.

Tornadoes: conditions are still favorable for tornadoes to develop.

Read: Storm safety: What to do when a tornado warning is issued in your area

Coastal flooding and high surf will continue through Thursday.

Eta is forecast to sweep north of Central Florida, likely exiting near Jacksonville before sunrise.

Weather will become much more stable after sunrise, with the winds gradually decreasing.

READ MORE: 9-point checklist of things to do for your family’s hurricane plan

WARNINGS AND WATCHES IN EFFECT: 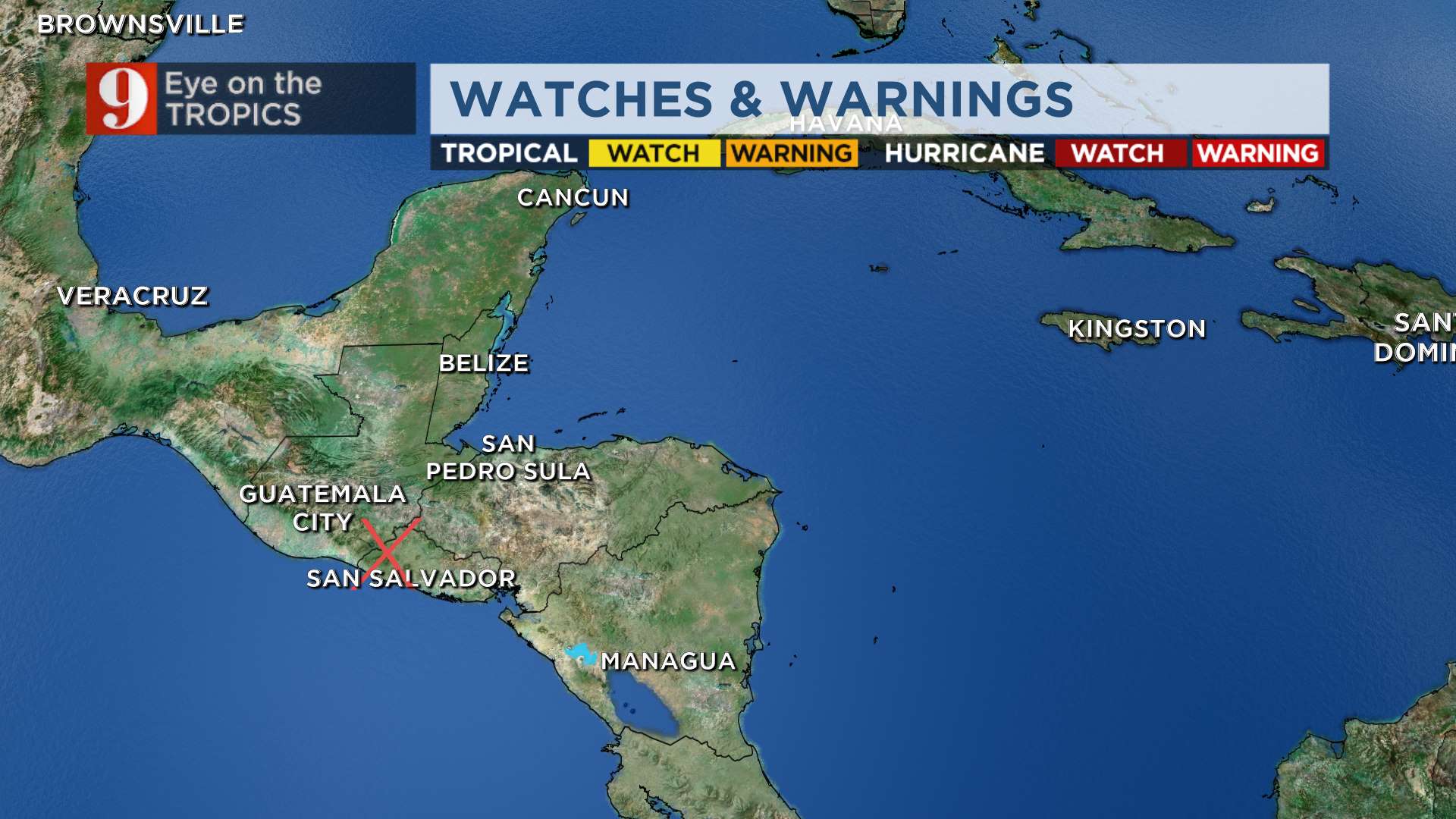 Sarah Wilson joined WFTV Channel 9 in 2018 as a digital producer after working as an award-winning newspaper reporter for nearly a decade in various communities across Central Florida.