What we know about Universal Orlando's new theme park

VIDEO: What we know about Universal Orlando's new theme park Universal Orlando Resort officials said they have an ?epic? announcement planned for Thursday morning, but what could it be?

By Chip Skambis
July 31, 2019 at 6:26 pm EDT
Universal Orlando Resort officials said they have an “epic” announcement planned for Thursday morning, but what could it be?
Universal did not say exactly what will be announced. Projects at the current parks that have yet to be announced are a new show to replace the "Terminator 2" 3-D show in Universal Studios and a new roller coaster under construction in the Jurassic Park section of Islands of Adventure.
But a source familiar with the project said and multiple theme park blogs are reporting the announcement is likely for a new park sandwiched between Sand Lake Road and the Orange County Convention Center, on a former Lockheed Martin dumping ground.
Last year, Comcast executives discussed plans during an earnings call to build a new park in Orlando that they hope could convince families to stay several days instead of taking a day trip to a park.
Universal currently has two trademarks for theme park names: Universal’s Epic Universe and Fantastic Worlds. Universal officials haven’t officially said which name it will use but tweeted this Monday:

This is kind of a big deal. pic.twitter.com/boxonV1uJF

We won’t know until an announcement which name Universal intends to use for the new park.
Records with the U.S. Patent and Trademark Office indicate Warner Bros. Entertainment, the studio behind the "Fantastic Beasts and Where to Find Them" films, initially intended to object to the “Fantastic Worlds” trademark, before dropping its opposition in March.
So how did we get here? What can we expect from the park? That’s a story that starts in 1997.
The park’s beginnings
In July 1997, representatives from the Environmental Protection Agency, Florida Department of Environmental Protection, Lockheed Martin and Universal Studios met to discuss the potential sale of 2,000 acres of land from Lockheed to Universal, according to meeting minutes.
The land was used as a missile storage and assembly area for the former Martin Marietta corporation before being acquired by Lockheed, and documents with the FDEP indicate the land was littered with toxic waste.
As part of the sale agreement, Universal would take the lead in cleaning up the land, receiving some reimbursements for the clean up from Lockheed, meeting minutes show.
Universal filed plans with the state to build what it called the Sand Lake Resort Complex on the land. If things had gone according to those plans, this is what the property would have looked like: 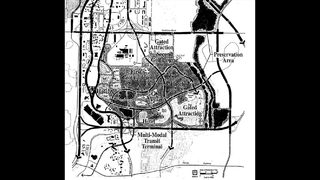 WFTV’s Vanessa Echols reported in October 1997 the plans would include two new theme parks, 13,000 hotels rooms, two golf courses and a retail district. Watch her report:
This news came as Universal was working on a $2 billion expansion at its original property, building what would become Universal City Walk and Islands of Adventure.
Eventually, Universal inked a deal with Lockheed to purchase the land and began cleaning up the toxic waste that was on the site—but the Sand Lake project became delayed.
Many factors contributed to the delay in the project, including the tourism downturn following the Sept. 11, 2001 terror attacks and lower-than-expected attendance at Islands of Adventure.
In August 2000, WFTV reported Universal reported a $98 million loss, which the company attributed to the heavy debt incurred building Islands of Adventure.
Vivendi also bought Seagram, Universal Studio’s owner at the time, in June 2000, bringing in a new corporate owner for the park.
During the early 2000s, Universal sold off some of the Sand Lake land, putting a temporary damper on expansion plans.
The expansion that lived
Though the early 2000s looked bleak for the Sand Lake expansion, two things happened to Universal that appear to have revived the plans.
First, Universal acquired the theme park rights to the "Harry Potter" franchise in 2006.
Next, Comcast acquired NBCUniversal in 2009, providing large corporate backing for the parks with deep pockets.
Once the Wizarding World of Harry Potter opened in 2010 at Islands of Adventure, Universal saw big attendance and revenue increases, pushing the park to build new hotels and eventually a water park on property.
With money coming in from the Harry Potter sections of the parks, Universal started putting plans in motion to buy back some of the land it had sold off years earlier.
Property records show a shell company called SLRC Holdings LLC—which has since been revealed in litigation and environmental filings as a subsidiary of Universal—began buying back parcels of land in the Sand Lake area starting in 2015.
WFTV began reporting that Universal was buying the land in December 2015, though when asked what it planned to do with the land, Universal officials said, “No comment from us.”
A lawsuit filed in 2016 regarding one of the sales contained a filing in which Universal officials indicated they planned to build a theme park on the land, providing the first public inkling that the expansion plans were back on.
In 2017, Universal bought an additional 100 acres along Sand Lake Road and filed plans to build an office park and warehouses on that plot of land.
Fantastically epic
Universal has not provided any official information on what it plans to do with the land or what the design of the park will be, but infrastructure permits, leaks and other public documents give us some clues.
Permits filed with Orange County in February have given us our first hints at what the 504-acre property will look like once Universal develops it.
The drawings show a large surface parking lot, with around 16,200 parking spots plus 172 handicap spots, on the eastern side of the property between Sand Lake Road and Universal Boulevard and details on expansions to Kirkman Road.

They also show multiple access roads leading into the western side of the property, where the new park will be constructed.
The drawings are related to the Kirkman Road extension currently under construction in Orange County. Work on the section of road by the new park began in November and was scheduled to be complete in mid-2020.
WFTV reported on internal Comcast documents leaked to Alicia Stella at the Orlando Park Stop blog that indicated the new park will have a hub-and-spoke design, like Magic Kingdom.
Those leaked documents also indicated that one of the lands in the park would be themed after Nintendo characters.
In November 2017, WFTV reported that Universal had filed permits with the city of Orlando to build a Super Nintendo World in the KidZone section of the Universal Studios theme park.
Those plans included a Mushroom Kingdom section with a Mario Kart ride and a Donkey Kong section with a roller coaster ride. Photos of models for that land were recently leaked by the Unofficial Universal Orlando Podcast.
City records show the KidZone Nintendo project was scrapped, and sources told WFTV’s Jamie Holmes that the company was instead using the Nintendo properties at the new park.
Sources told Jamie Holmes one attraction under development was a 3D-style show set to be integrated with a Nintendo movie currently under development by Illumination Entertainment, makers of the Minions franchise. But how far that got in the development process, we don’t know.
Another Nintendo-based attraction designed by Universal, as reported by theme park vlog Midway Mayhem, is a Pokemon-themed land, with a ride based on the video game "Pokemon Snap."
As with any non-official information, it remains to be seen what makes it off the drawing board and into the new park. Universal has not officially confirmed any of this information.
Universal will be making the announcement at the Orange County Convention Center, which is just south of the new park site, at 10 a.m. Thursday.