ORLANDO, Fla. — Three I-4 Ultimate construction workers fell 15 feet Friday morning on the ramp from Garland Avenue to I-4 Eastbound near Colonial Drive.

The incident happened shortly before 10:30 a.m. Video from the scene appears to show a concrete barrier fell from an elevated construction area down tot he ramp below.

According to the Orlando Fire Department, one worker suffered a rib injury. Another worker has an injured leg.

SGL, the construction company, said the ramp is back open.

"There was not a project-wide shutdown. However, all work relating to similar platforms across the project was immediately suspended so they could be fully inspected," said a statment from SGL Contractors on Friday afternoon. "This is currently in progress with some platforms already back in service."

Click here to check for traffic delays and detours. 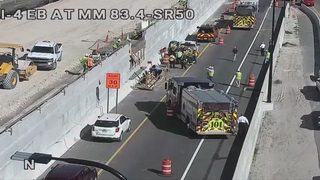 This is a breaking story. Stay with WFTV.com, the WFTV News App, and Channel 9 Eyewitness News for LIVE updates. Not near a TV? Click here to watch WFTV newscasts live.

9 things to do in Daytona Beach this holiday season